Eric Rosario (my Dad) was an International Weightlifter, Indian National champion and representing India at many International events.  Since then he has turned his attention to Strength and conditioning for athletes of many sports.  Some of his 60 years of experience will be brought to you during a series of articles that will be featured through our Blogs.  We hope you enjoy them.

Prisca Rosario (my Mum) was Indian National champion and is still playing the game today at the age of 77.  She has in recent years become a qualified Fitness trainer.  Her experience will help you to get a great perspective of the place of Strength conditioning in Table Tennis. 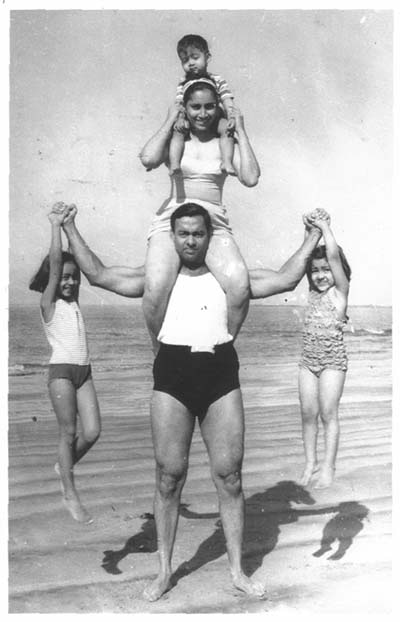 In recent years elite athletes in almost every sport have turned to strength conditioning to assist them in their search for excellence in their particular discipline.  In spite of this, many Table Tennis players and coaches question the need for strength in their sport.  They claim that because the racquet and ball used are far from heavy, strength is not necessary.  Even though the ball and racquet are very light in comparison to many other sports, considerable structural strength is needed to provide the base for generating the power required to propel the racquet and hence the ball at the speeds sometimes required.  Whether it is a hammer thrower, a shot putter or a table tennis player the athlete must have a strong base from which to propel a missile.  As one famous coach put it , "You cannot shoot a cannon out of a canoe".

Spectators at Table Tennis matches are invariably amazed at the speed at which the ball travels and the quickness of eye and limb of the players.  But it is interesting to examine just how fast the ball does travel and then compare it to the speeds achieved by other ball sports.  It has been estimated that the ball travels at 100mph (160kph) when it leaves the bat, but Jay Turberville conducted an exhaustive analysis by using still photos, video study and even sound analysis to come up with a rather definitive answer as to how fast the little sphere travels when it reaches the opponent.  Because of the lightness of the ball (2.7gms and 40 mm diameter) and air resistance slowing the ball down, there could be a considerable difference.

In cricket, bowlers like Jeff Thompson has been clocked at 99.7 mph but Brett Lee and Shaun Tait are considered to be even faster (Wikipedia), but the pitch is 20.5 metres long as compared to the 2.74 x 1.525 metres of the table tennis table.  This gives the receiver of the cricket ball considerably more time to react.

In tennis Andy Roddick is claimed to serve at 155 mph (249.4 kph) on a court that is 33 x 16.5 metres.  Faster ball speed, but over a much longer court. In spite of the court length players much slower than Roddick often serve aces.

To summarise, the table tennis player needs a strong base from which to propel the ball, the power to achieve this propulsion, the power and speed to be in the right place to receive the ball.  Once the player reaches the correct position, the feet hit the floor and stop while the rest of the body tends to keep moving and the player needs strength in the joints of the knees, ankle and waist to overcome inertia and prevent injuries.  After a top spin, muscles of the shoulder and trunk require strength to brake the action if injuries are to be prevented (Cornelius, Todd).  They also need endurance both muscular and cardiovascular to keep playing for a long time.  It must also be remembered that the endurance of a table tennis player is very different to that of a marathon runner and the strength and power required for table tennis is different to that of a weightlifter.  The endurance is of the stop start variety and the power is more speed strength.  However not all players and their coaches understand the principle of strength conditioning which build these qualities.  In the next issue we will discuss how these can be developed.

a. Strength and Conditioning for Table Tennis By Christian Lillieroos

I think it is a very interesting topic to learn wich muscles to build and in which way so you get a better structural base for table tennis. As it is said in the article, most coaches teach nothing about it. I am looking forward to learn more in the next issue!